2017 All Japan Grand Champion fed and raised on Saki-Hikari 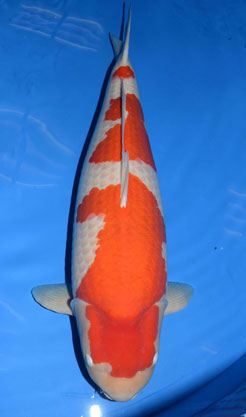 At the 48th All Japan Koi Show held on the 3rd February 2017, the largest and most prolific Nishikigoi show in the world, a splendid 6 year old, 97cm KOHAKU owned by Mr Daishiro Shirasaka, bred by Sakai Fish Farm Co., Ltd. and handled by Senshu Nishikigoi Center, was crowned All Japan Grand Champion. The Grand Champion KOHAKU was fed and raised on Saki-Hikari foods as its primary diet.

The owner named the Koi 'S Legend'. The S comes from Sakai and Shirasaka, the initial of the breeder and the owner. S Legend was a Grand Champion of the 52nd ZNA International Koi show in 2016.

Developed on the back of decades of first hand breeding experience and feeding trials, Saki-Hikari diets provide complete and balanced, superior nutrition, bringing out the Koi's true potential. The only fish foods to contain Hikari-Germ, a strain of bacteria which aids digestion, helps optimise nutrient utilisation resulting in less waste and excellent water quality as well as supporting the Koi's own good bacteria, making the fish's immune system stronger. Only the finest quality ingredients go into Saki-Hikari making them extremely palatable and providing superior nutrition.

Saki-Hikari diets are available in small, medium and large pellet sizes and pack sizes of 2kg and 5kg. As well as being the diet of choice for the 2017 All Japan Grand Champion, many Japanese breeders and expert Koi keepers throughout the world choose to feed Saki-Hikari.

Species specific diets for all types of tropical fish

High quality daily diets for all types of pond fish